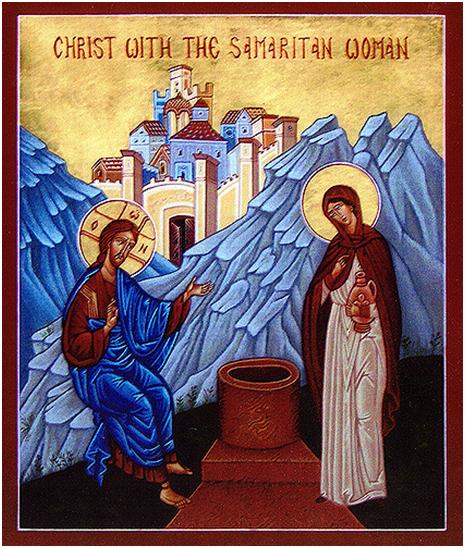 Christ with the Samaritan Woman Icon

1 Now on the first day of the week Mary Magdalene came to the tomb early, while it was still dark, and saw that the stone had been taken away from the tomb.

2 So she ran, and went to Simon Peter and the other disciple, the one whom Jesus loved, and said to them, “They have taken the Lord out of the tomb, and we do not know where they have laid him.”

3 Peter then came out with the other disciple, and they went toward the tomb.

4 They both ran, but the other disciple outran Peter and reached the tomb first;

5 and stooping to look in, he saw the linen cloths lying there, but he did not go in.

6 Then Simon Peter came, following him, and went into the tomb; he saw the linen cloths lying,

7 and the napkin, which had been on his head, not lying with the linen cloths but rolled up in a place by itself.

8 Then the other disciple, who reached the tomb first, also went in, and he saw and believed;

9 for as yet they did not know the scripture, that he must rise from the dead.

10 Then the disciples went back to their homes.

15 As I began to speak, the Holy Spirit fell on them just as on us at the beginning.

16 And I remembered the word of the Lord, how he said, ‘John baptized with water, but you shall be baptized with the Holy Spirit.’

17 If then God gave the same gift to them as he gave to us when we believed in the Lord Jesus Christ, who was I that I could withstand God?”

18 When they heard this they were silenced. And they glorified God, saying, “Then to the Gentiles also God has granted repentance unto life.”

19 Now those who were scattered because of the persecution that arose over Stephen traveled as far as Phoenicia and Cyprus and Antioch, speaking the word to none except Jews.

20 But there were some of them, men of Cyprus and Cyrene, who on coming to Antioch spoke to the Greeks also, preaching the Lord Jesus.

21 And the hand of the Lord was with them, and a great number that believed turned to the Lord.

22 News of this came to the ears of the church in Jerusalem, and they sent Barnabas to Antioch.

23 When he came and saw the grace of God, he was glad; and he exhorted them all to remain faithful to the Lord with steadfast purpose;

24 for he was a good man, full of the Holy Spirit and of faith. And a large company was added to the Lord.

25 So Barnabas went to Tarsus to look for Saul;

26 and when he had found him, he brought him to Antioch. For a whole year they met with the church, and taught a large company of people; and in Antioch the disciples were for the first time called Christians.

29 And the disciples determined, every one according to his ability, to send relief to the brethren who lived in Judea;

30 and they did so, sending it to the elders by the hand of Barnabas and Saul.

5 So he came to a city of Samaria, called Sychar, near the field that Jacob gave to his son Joseph.

6 Jacob’s well was there, and so Jesus, wearied as he was with his journey, sat down beside the well. It was about the sixth hour.

7 There came a woman of Samaria to draw water. Jesus said to her, “Give me a drink.”

8 For his disciples had gone away into the city to buy food.

9 The Samaritan woman said to him, “How is it that you, a Jew, ask a drink of me, a woman of Samaria?” For Jews have no dealings with Samaritans.

10 Jesus answered her, “If you knew the gift of God, and who it is that is saying to you, ‘Give me a drink,’ you would have asked him, and he would have given you living water.”

11 The woman said to him, “Sir, you have nothing to draw with, and the well is deep; where do you get that living water?

12 Are you greater than our father Jacob, who gave us the well, and drank from it himself, and his sons, and his cattle?”

13 Jesus said to her, “Every one who drinks of this water will thirst again,

15 The woman said to him, “Sir, give me this water, that I may not thirst, nor come here to draw.”

18 for you have had five husbands, and he whom you now have is not your husband; this you said truly.”

19 The woman said to him, “Sir, I perceive that you are a prophet.

20 Our fathers worshiped on this mountain; and you say that in Jerusalem is the place where men ought to worship.”

21 Jesus said to her, “Woman, believe me, the hour is coming when neither on this mountain nor in Jerusalem will you worship the Father.

23 But the hour is coming, and now is, when the true worshipers will worship the Father in spirit and truth, for such the Father seeks to worship him.

24 God is spirit, and those who worship him must worship in spirit and truth.”

25 The woman said to him, “I know that Messiah is coming (he who is called Christ); when he comes, he will show us all things.”

27 Just then his disciples came. They marveled that he was talking with a woman, but none said, “What do you wish?” or, “Why are you talking with her?”

28 So the woman left her water jar, and went away into the city, and said to the people,

30 They went out of the city and were coming to him.

33 So the disciples said to one another, “Has any one brought him food?”

34 Jesus said to them, “My food is to do the will of him who sent me, and to accomplish his work.

35 Do you not say, ‘There are yet four months, then comes the harvest? I tell you, lift up your eyes, and see how the fields are already white for harvest.

36 He who reaps receives wages, and gathers fruit for eternal life, so that sower and reaper may rejoice together.

37 For here the saying holds true, ‘One sows and another reaps.’

38 I sent you to reap that for which you did not labor; others have labored, and you have entered into their labor.”

39 Many Samaritans from that city believed in him because of the woman’s testimony, “He told me all that I ever did.”

40 So when the Samaritans came to him, they asked him to stay with them; and he stayed there two days.

41 And many more believed because of his word.

42 They said to the woman, “It is no longer because of your words that we believe, for we have heard for ourselves, and we know that this is indeed the Savior of the world.”